Kerosene lamps and sore eyes were once routine elements of grading student homework. Solar electricity has changed that. Caroline Hombe, a 35-year-old teacher in rural Mhondoro, Zimbabwe, can go through the pile of books stacked on her table without worrying that the onset of darkness will put an end to her work. African countries, blessed with sunlight all year round, are tapping this free and clean energy source to light up remote and isolated homes that have no immediate hope of linking to their national electricity grid.

“My eyes were always painful and my head ached from the fumes,” Ms. Hombe told Africa Renewal. “Imagine trying to go through a hundred exercise books in poor lighting and smoke. The alternative was marking assignments before sunset, but that meant I could not spend time with my two young children before their bedtime, or prepare dinner early enough. Thankfully, this is now a headache of the past.” 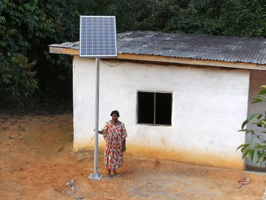 Electrifying rural areas poses unique challenges for African governments. Remote and scattered, rural homes, unlike homes in urban areas, are costly and often impractical to connect to the grid. Under the New Partnership for Africa’s Development (NEPAD), countries are seeking innovative alternatives to give rural families efficient means to cook their food and light their homes. Stand-alone sources of energy, such as solar, wind and mini-hydro generators, can help fill the gap.

NEPAD, Africa’s development blueprint, recognizes that to achieve the desired social and economic prosperity, countries must boost access to cheaper and reliable energy. Excluding South Africa and Egypt, no more than 20 per cent (and in some countries as few as 5 per cent) of Africans have electricity. This figure falls to an average of 2 per cent in rural areas where the majority of Africans live — a far cry from the 35 per cent consumption level, or more, African leaders wish to achieve.

‘The sun is free’

The target is quite feasible, says Mr. Garai Makokoro, director of the Energy Technology Institute in Zimbabwe. Africa, after all, possesses some of the world’s largest watercourses (hydro-potential), as well as some of the world’s largest oil, coal and gas reserves. The way to move the NEPAD vision ahead, he adds, is for countries to find cheaper power sources while minimizing environmental hazards and ensuring sustainability. The energy expert believes that solar power, clean and renewable, fits the bill.

“African countries must think outside the box. The sun is free and inexhaustible. Solar technology — photovoltaic panels — converts the sun’s radiation directly into electricity with no pollution or damage to the environment. The panels can generate enough power to run stoves, pump water, light clinics and power televisions. Africa has one of the best climates for this type of energy,” Mr. Makokoro.

But even with the compelling advantages solar power offers, the Human Development Report, published by the UN Development Programme (UNDP), shows that the majority of Africans still rely on less efficient traditional energy sources. Wood, or other biomass such as crop waste, is the dominant fuel for cooking. This comes at a huge cost to the environment as families continue to cut down trees for much-needed fuel.

In the early 1990s, numerous villages turned to solar power in parts of Africa where one might least expect to stumble upon an oasis of lights shimmering in the pitch-black night. Perhaps the most ambitious project of this nature, and one that is often cited, is a Zimbabwean project supported by UNDP through the Global Environment Facility (GEF). The initiative, jointly funded by GEF ($7 mn) and Zimbabwe ($400,000), installed some 9,000 solar power systems throughout the country in a bid to improve living standards, but also to curtail land degradation and pollution.

The River Estate near Shamva, 70 kilometres from Zimbabwe’s capital, Harare, boasts one of the best solar-village models in the country. Fifty-two commercial farming families share systems there is one system for every two houses. Each family has two lamps and a connection for a radio or small television set. The new lighting systems have improved the quality of life for the community. They have extended study hours for schoolchildren, reduced rural-to-urban migration in the area and upgraded health standards by electrifying a local health center.

“With all their advantages, solar systems are not cheap to install,” says Mr. Jem Porcaro, an analyst for the Energy and Environment Group at UNDP. “A typical home system in sub-Saharan Africa costs anywhere between $500 and $1,000 and such systems typically provide enough power to light three to six rooms and power a black-and-white TV each night. But the cost is well beyond the means of most African households.”

The use of innovative financing schemes, like fee-for-service arrangements, is one way to overcome these high up-front costs, notes Mr. Porcaro. Installing solar panels to power multiple houses at once can also cut down on costs. More households could afford solar power, argues the World Bank, if governments were to remove barriers, such as high import duties, that increase the cost of the panels. Regional cooperation to facilitate trade is another major NEPAD goal.

African leaders are demonstrating commitment to bring solar power to rural homes. For example, a UNDP-GEF report on solar financing and delivery models notes that private sales, through dealers, initially dominated the market in South Africa, but that the government, a leading NEPAD proponent, later initiated a massive off-grid effort that is now fully active. Botswana, Namibia, Swaziland, Zambia and most countries in the region have developed solar markets, in many cases with special funds to support consumer credit.

Besides domestic use, people are harnessing solar power to run small businesses. Entrepreneur Abina Lungu operates a maize-grinding mill in Nyimba, eastern Zambia. With reliable solar energy, he can work well into the night to meet all his customers’ orders. His house, close to the mill, is also lit by solar power. Mr. Lungu is one of the many villagers serviced by the Nyimba Energy Service Company (NESCO), an enterprise funded by the Swedish International Development Agency. To get power into a home or shop, NESCO installs a system that includes a panel, battery, charge controller and power points. The cost is $33.33, including the contract fee. Thereafter, consumers pay a monthly rental fee.

“I pay 30.0 kwacha [about $6.25] as a rental charge every month to NESCO,” Mr. Lungu told the Integrated Regional Information Networks (IRIN), a humanitarian news agency. “For me, it works out cheaper to use solar because paraffin is more expensive, and even if electricity comes to Nyimba, not all the people will get connected.”

As we continue opening up markets in Africa, we at DeltaCron have realized how little marketing is  needed to convince African citizens to turn to solar. The demand is high. African citizens require both small solar equipment to large scale equipment. For this reason, DeltaCron continues to bring quality solar products of all sizes to meet how new customers demands.