The government of Canada has launched a new program that offers Canadians grants of up to $5,000 to pay for energy-saving home upgrades.

Homeowners will be able to receive grants of up to $5,000 to make energy efficient retrofits to their primary residences, and up to $600 to help with the cost of home energy evaluations.

How does the Program work?

Before starting any work, you must first complete a home energy assessment with a registered energy advisor.

2. Get a custom report with recommended upgrades

After your home energy assessment, your registered energy advisor will provide a report with a list of recommended upgrades to help lower your hydro bill and make your home more energy efficient. You can will then apply here for the rebates

Get in touch with one of the Deltacron Energy experts for a custom solar pv grid tied or offgrid system design and competitive estimate. Once our team finishes the installation, then you will need to schedule another energy assessment.

You must complete a final home energy assessment to qualify for rebates. The follow-up visit takes about one hour and must take place within 120 days of your first visit.

5. Receive your rebate cheque within 12 weeks

You’ll also be reimbursed $600* for your energy assessments. This will be included in your final cheque.

For homeowners and landlords, the budget also aims at reducing emissions from residential buildings with a $4.4-billion program to provide homeowners and landlords with interest-free loans of $40,000 for “deep home retrofits.” The money can be used for improvements like better insulation, energy-efficient furnaces and water tanks, solar panels and new windows, the budget says. The money will flow through the Canada Mortgage and Housing Corporation (CMHC) 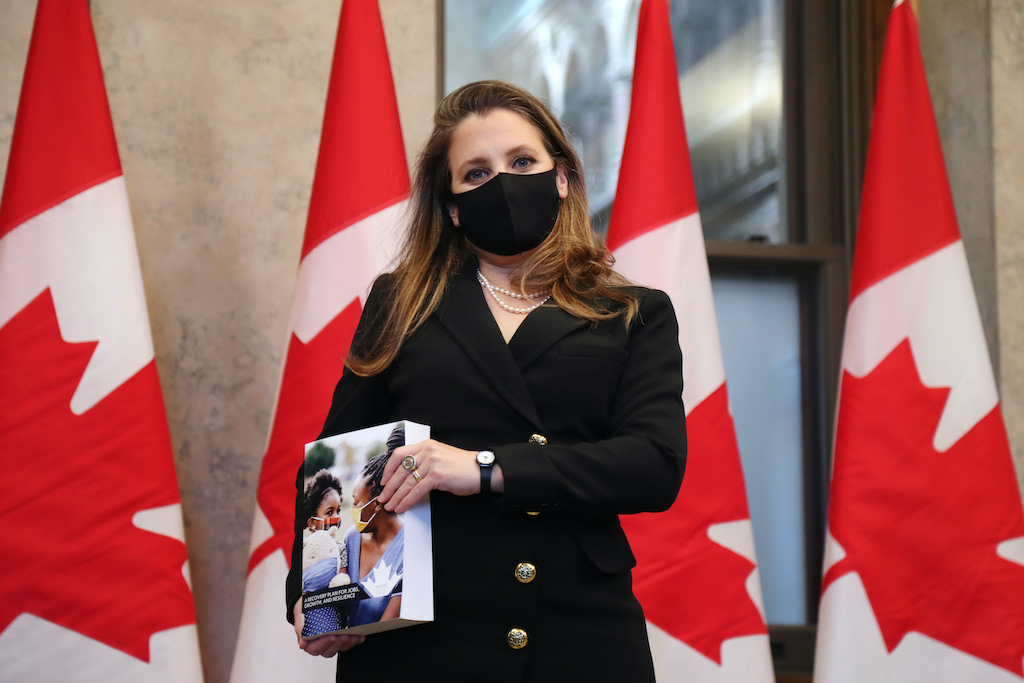 As the world confronts a warming climate, the federal Liberals are committing billions more dollars to reduce greenhouse gas emissions across the economy and help drive a “green recovery” from the pandemic-induced economic slowdown.

“We are at a pivotal moment in the green transformation,” Freeland said in a speech to the House of Commons.

“We can lead, or we can be left behind. Our government knows that the only choice for Canada is to be in the vanguard.”

Freeland said the budget measures will help the government meet its greenhouse gas reductions targets under the Paris climate agreement, achieve net-zero emissions by 2050 and preserve 25 per cent of land and marine conservation targets by 2025.

Much of the proposed spending focuses on giving private sector companies incentives to develop and adopt clean technology.

Five billion dollars over seven years will go to the Net Zero Accelerator, a fund that helps large-emitting companies reduce their greenhouse gas emissions. That’s on top of $3 billion the government committed in December.

Sarah Petrevan, policy director at Clean Energy Canada, said the total $8 billion will help heavy industries such as steel and cement decarbonize and grow their competitiveness.

“Government’s role is to kind of set the stage for then private markets to develop and shift in the direction, and this is kind of what Liberals are doing,” she said of the budget.

“That’s the kind of thing that you have to do support an economic transition. It can’t all be government.”

To help foster a domestic clean technology manufacturing sector in Canada, the government said it will offer companies that manufacture zero emission devices, like solar panels and electric vehicles, a 50 per cent cut to their corporate or small business taxes for the next 10 years.

For homeowners and landlords, the budget also aims at reducing emissions from residential buildings with a $4.4-billion program to provide homeowners and landlords with interest-free loans of $40,000 for “deep home retrofits.” The money can be used for improvements like better insulation, energy-efficient furnaces and water tanks, solar panels and new windows, the budget says. The money will flow through the Canada Mortgage and Housing Corporation (CMHC)

The government estimates more than 200,000 households could take advantage of that program.

Tom-Pierre Frappé-Sénéclauze, the buildings and urban solutions director at the Pembina Institute, an environmental think-tank, said the retrofit funding could create up to 10,000 well-paying jobs over the next five years. But he said Canadians will need to spend more on retrofitting their homes for Canada to meet its climate goals.

“While significant, this investment, unfortunately, is unlikely to get us to our destination,” he said.

Another initiative targeting heavy emitters is a tax credit for companies that invest in technology that captures carbon dioxide emitted by fuel combustion or other industrial processes and stores it in the ground instead of releasing it into the atmosphere. The budget said the government will undertake a 90-day consultation process to determine the rate of the incentive for capital investments in carbon capture, utilization and storage (CCUS).

This is bold step by the Canadian government to put the money where their mouth is. As much as we at Deltacron Tech understand that much more can be done, we would like to take this moment to appreciate this step in the right direction on behalf of the many customers we have encountered in our industry. The majority of our tax paying customers have always looked to the government to help them go green, especially were power is concerned, but that help has been nowhere to be found. But with this announcement in Budget2021, the future does look greener for many homeowners.

We look forward to having these announcements implemented.